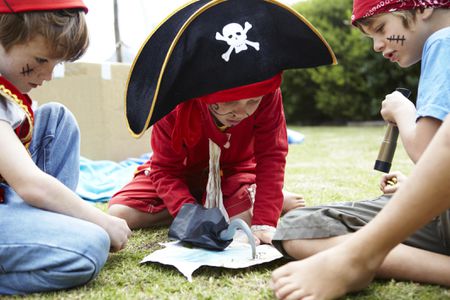 You have an entire team of swashbuckling Pirate Party Games, also the odd princess. They are altogether energized, and you will host to arrange some reasonable privateer get-together amusements, however, dread not, and keep in mind a kid’s creative energy.

Recreations for privateer gatherings can be adjustments of conventional amusements, and there is the preferred standpoint that everybody definitely realizes how to play them: they simply should be adjusted into Pirate Games for youngsters

With regards to Pirate party amusements, you may be astonished by to what extent children will be upbeat to simply go around and play with swords (utilize delicate froth or inflatable ones) at a birthday party.

In any case, on the off chance that you need to sort out some progressively organized amusements and exercises, here are a few recommendations

For younger children, a simple task to walk across the plank without losing balance is a fun challenge.

For this pirate game, you will need a plank which you can make yourself with a longboard. You don’t need to have it far off the ground (you don’t want any injuries) but you can prop it off the ground a little with milk crates, old tires, etc.

Just make sure it is sturdy enough for the kids to stand on without wobbling.  If you’re feeling really festive you can create a sea-worthy atmosphere around it like in the picture.

For the older kids who need a bit more of a challenge, you can include the element of a pirate duel. Any self-respecting pirate will know how to wield a sword, especially in desperate situations.

Two pirate participants, armed with swords, step onto the plank and duel while maintaining their balance. The person to stay on the longest is the winner, and the next two pirates take their turns.

You can make your own swords from those long balloons used for balloon animals, pool noodles, or purchase fun inflatable theme swords…!

Treasure hunts always go down well at a kid’s birthday party and they’re quite easy to tailor to become one of your pirate party games.

Bury a small treasure chest full of prizes somewhere in the garden a few days before the party and mark the location with an X. Then use these clue cards (below right) that the kids must follow to find the location of the buried treasure.

You could also use a different prop as a landmark to help them find each clue (ex, the clue card could tell them to find a parrot in a tree, or look for a skeleton hand pointing in a particular direction towards the next clue – see here for cheap pirate props).

For younger children, you could take photos of each prop beforehand and give them the photos of each clue to help them find them. As they discover each clue they can be rewarded with some chocolate gold coins to keep them going until they find the buried treasure.

When they’ve found the X that marks the spot, have an adult dig up the treasure chest and pass out the prizes inside.

For an alternative treasure hunt, hide lots of these gold bar favour boxes around the house/garden. Some can have prizes or candy inside while others can have booby prizes aka ‘Fools Gold’ or forfeits. See here for cheap prizes and favours.

Get More On Wikipedia

This probably is a logical game to play after the sword duel. Divide your guests into pairs, and assign one to be the medic and the other to be the injured pirate. The good doctor is supposed to bandage up the wicked pirate in record time.

Use toilet paper rolls as bandages, and anyone that tears up the paper has to start all over again. The winner is the team who not only finishes first but has managed to get the bandage on the most competently.

Preparation: This is a pirate-themed version of a lucky dip. Make your seaweed out of ripped up bin bags just like we do on Swashbuckle and hide small prizes among the weeds for your party guests to find.

How to play: Play some music for the children to dance to – when it stops, the Swashbuckler who is closest gets the chance to dive in and find some hidden treasure.

TOP PIRATE TIP: Why not add some water for extra stickiness, and throw in some other stinky objects like smelly socks and cardboard fish bones?

TOP PIRATE TIP: Decide beforehand whether pirates who’ve found a prize should leave the game to give others a chance.

At the start of the party, give each guest 10 gold coins. Choose a pirate word to be the forbidden word of the day. Since kids will be talking like pirates, some ideas for forbidden words include pirate, ship, matey, and arrrrrrrr.

For the first 30 minutes, kids simply continue with the party activities as planned, but when one kid catches another saying the forbidden word, the offending player must surrender one of his coins to his captor. When time is up, the pirate with the most coins wins.

This is another best of the best pirate games, in my opinion, kids pirate party ideas for games. It needs to be played outdoors or in a large indoor space. The little pirates are all given swords (either foam or inflatable) and they must race to capture the captain.

Every time the Captain is touched with the sword he must stand in the spot until he gives away some of his booty ( candy) to be released. The game is played until the Captain runs out of candy. This game is also known as the human piñata.

The captain can be played by you or you can enlist another fun spirited adult to help (for a bonus have them dress up a little). Kids love chasing adults around, this pirate party game is always a hit. You just need a foam sword for each guest and a bag of piñata candy.

Preparation: The race is on in this homemade version of Swashbuckle’s Shipwreck Rummage. Hide ‘jewels’ or other treasure around the house and garden, then take close-up pictures of their hidden location.

How to play: The Swashbucklers must try to spot clues in the pictures to work out where the treasure is hidden. Once they’ve worked it out, send them off to collect the jewel. Find all the treasure for a bonus pirate prize.

TOP PIRATE TIP: Don’t make the clues too easy – it’s amazing what those Swashbucklers will spot! Besides, you can always give them helpful hints; if they’re getting close, give them a “Yarrr!” and if they’re going the wrong way, shout “Farrr!”

A variation of musical chairs with the chairs replaced with treasure maps. Use these treasure map placemats and lay them on the ground so there is one less than the number of players.

Have the pirates circle the treasure maps while the music plays, then when it stops they have to dash to stand on a map. Every time someone loses they can be made to walk the plank (see above).

The pirates divide into teams and take their place behind their team’s pirate ship. Each team is given a set of cannon balls and when the whistle blows they try and get as many of their cannon balls through to the other teams’ ship.

The team that has the least amount of balls in their ship when the whistle blows again wins. Play a couple of rounds of this and then award all participants with a small prize.

I can’t take credit for this idea, I was inspired by this awesome blog. You should definitely check it out because this was not the only worthy pirate party game.

My favourite was Pirate Pete Says – where the kids learn fun pirate actions to do when they hear specific prompts during a story. It was a huge hit, but you’ll need to check out the blog for complete details.

For cannonballs use plastic ball pit balls or for a more budget-friendly option simply use crumpled up balls of newspaper. I would make about 40-50 of them.

For ship, you can create your own, or even better let the kids make them out of empty cardboard boxes. If they are younger you may need to help with the construction but you can let them decorate with markers and stickers.

Use an old pillowcase and let each pirate team create their own flag. To play space the ships out about 10-15 ft apart in the yard or party space. Create a line a few feet in front of each ship.

Cannons can only be thrown from behind your team’s line, but the little pirates are allowed to cross into the middle to retrieve cannons. Play four or five rounds lasting about 3 minutes each.

For this game, you’ll need two large cardboard boxes. Kids can decorate them to look like pirate ships if they want. Place the ships a couple of feet away from each other. Divide guests into two teams and have each one gather at a pirate ship.

When you signal the start of the game, each pirate crew will bomb the other ship with cannonballs. You can purchase a lot of soft play balls, such as the kind used in ball pits, or you can make your own cannonballs out of things like crumpled up newspaper or aluminium foil.

When time is up, count how many cannonballs are in each box. The team that landed the most in the opposing ship wins.